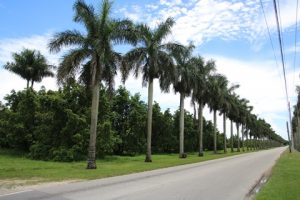 In this personal injury case study, the occupant of a car turned off the traveled highway. He entered the access road to housing for the purpose of visiting relatives.

After traveling approximately 50 yards, the plaintiff’s vehicle was crushed when a large Royal Palm failed in its entirety. There were eyewitnesses to the matter. The vehicle was totaled and the plaintiff suffered personal injury.

The evidence consisted of pictures taken after the accident, along with eyewitness accounts that supported the plaintiff’s assertions.

Analysis of the Facts in the Personal Injury Case

After closely studying the pictures, we presented the following facts during our expert deposition on behalf of the defendant:

The matter was settled after our deposition.

Landscape Architects Beware: An attorney defending a landscape installer for breach of contract asked for my review of the matter. Mediation was three weeks away. The allegation was that the plant material installed in a new commercial project did not rise to [...] Continue reading

Desktop Review: Gretchen Gallo and Bad Neighbors This desktop review came from the legal department of an insurance company. The matter was rooted in the claimant whose driveway and swimming pool were being damaged by the roots of a neighbor’s oak tree. Seri [...] Continue reading

Dead trees do talk. A birthday milestone for many girls is Sweet Sixteen. And so it was for the girl making her way home from a shopping trip with her father. Having just called her girlfriend to chat about the evening’s plans, she had approximately 45 secon [...] Continue reading