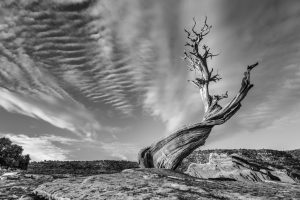 11:30 p.m. Had you been there on the wooded hill illuminated by the full moon, you would have definitely heard the noise. But you probably would never, ever have imagined its source. Something like a muffled groan but intuitively not human. Time would pass and you would have filed the origination of the sound back into the Rolodex of your mind.

11:45 p.m.  Now there’s another sound, a high-pitched sound. Again non-human but unmistakably present in the still night. The sound repeats itself again, then again. You could search the landscape for something that was making these sounds, but you would find nothing because nothing was there except the trees. And to that point, it was the sound of a tree slowly splitting and giving way under massive decay at the base of its trunk.

11:55 p.m.  A mother traveling with her young daughter has precisely four minutes to live.

11:59 p.m. Now the sounds from the tree standing on the hillside contiguous with a traveled highway reverberate into one long continuous indescribable shrill as the enormous tree begins its descent onto the roadway where the mother and daughter are traveling at 55 mph. With a minute to go until midnight, the unbelievable convergence of a car traveling at precisely 55 mph met a massive pine tree that fell under its own weight as decay, after many decades of time, moved through the last remnant of wood holding it upright.

12 a.m. A mother, raising a young daughter, is cut down in the midst of a brilliant career.

In the after situation, depositions were taken. Many experts were put to the task of defending their opinions with regard to, first and foremost, a duty to inspect the tree whose footprint, if it failed, would be onto the traveled highway. Once duty was established, it became a matter of the visible and obvious signs or symptoms that the tree exhibited and defined that the subject tree was, in fact, at risk for failure prior to the actual tragic event.

One of the issues at hand reduced itself to this: Precisely when did the tree become a host for opportunistic and parasitic fungi, which are always present and always waiting for the right set of circumstances to enter a tree’s biology? To this point, several opinions were rendered. But one thing was crystal clear: There was a breach on the blind side of the tree from the traveled highway. This breach was open and obvious to even the most casual observer. This matter hinged on precisely how long had the tree been damaged, allowing opportunistic parasitic fungi to do their job.

I discovered where the remnant parts of the tree had been taken. Cutting a small edge from the lowest portion of the trunk, closest to the open and obvious wound, it became a matter of counting the rings that the tree laid down over the years to determine when the tree actually suffered the wound which, left undetected, resulted in the tree’s failure. It was quickly revealed that the tree had been damaged more than two decades prior to the tragic and eventful evening.

Enough time had elapsed, the jury thought, that an inspection of the blind side of the trees from the highway could have and should have taken place.

And so it came to pass, in a small farm-belt community, that the owner of the property was in fact obligated to inspect his trees for defects. The subject tree had a defect that was open and obvious to even a casual observer, who could have taken the matter to a person with expertise in trees, who would have no doubt condemned the tree for removal or other remendial action.

A hollow victory for many observers including the attorney representing the plaintiffs and, of course, the little girl who grew up without a mother.