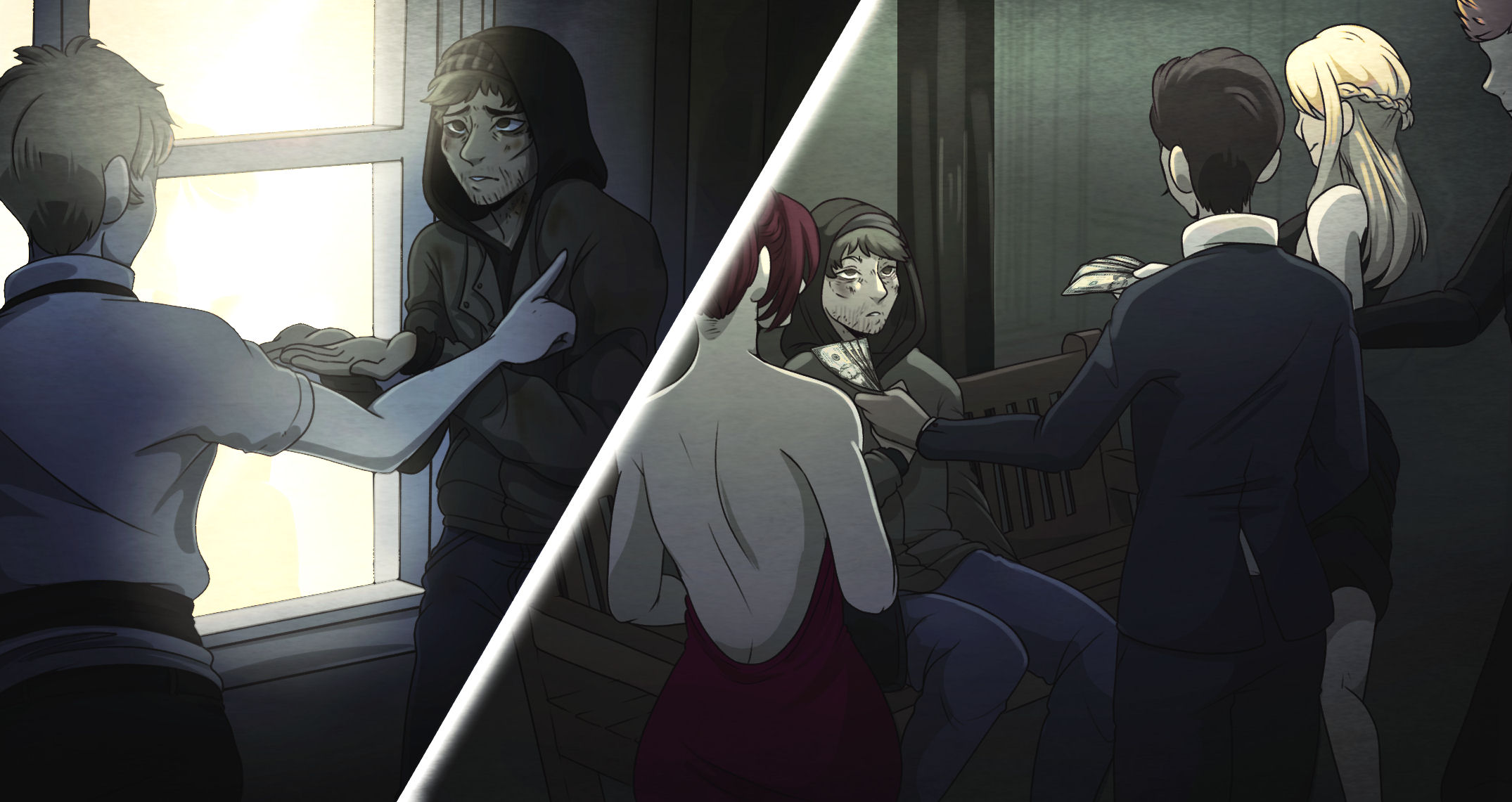 As both fists of my father’s hands hit the dining table, drinks from the three couples’ gilded glasses spilt onto the fine linen tablecloth below. “You did what?”  While his crescendo may not have matched that of Julie Andrews in The Sound of Music, it nonetheless made a riveting impression on those in attendance.

Good guests all, everyone, including my mother and I, sat silent. I was amazed, having never before seen this side of my father’s behavior. Others had seen this type of reaction before in others, as evidenced by the betrayal on their faces. But not me. I had just witnessed what a group of incredulous people looked like. I was in the fourth grade and had much to learn. That night I would learn much.

It seems that Pops Lockney, a person my father placed much trust in, including providing him with a place to sleep and eat, as Pops was without a home, had just turned away a hungry person at the back door of the kitchen of my father’s tavern/restaurant. A mortal sin it came to be, never to be repeated, at least with my father present.

Pops stood silent, hands folded in front of him, head bowed in singular reverence of the brief verbal flogging just received. Humbled. Ashamed. He stood alone while others looked on at the scandalous event just witnessed. And I, for the first time, witnessed empathy as the seated dinner guests all forgave him with mumblings of pleas to my father to follow suit.

This was a time before political correctness spewed its vile redundancy upon and across the social canvas, all to the point that expressing oneself today is nearly not possible without consternation. If you were homeless, you were a “bum” – but don’t mention that term in front of my father. Just down on their luck is all. And hungry has no social limitations; no color of skin, no net worth. Don’t ever pass a hungry man without helping, if possible.

And so on that chilly fall night many, many decades ago, an entourage of wait staff, including cooks, dishwashers, and barkeeps, set out to find a hungry man without a home. The accomplishment was singular in that people from all social and economic means gathered together to help a less-fortunate person. I have seen this benevolence repeat itself in the marketplace time and time again. It has a force to be reckoned with.

The streets were all but deserted, as the night had closed the shops and the steel mill had long ago turned over to the night shift. There were gentlemen in suits and fine ladies in their alluring best; there were patrons of the tavern; there was even, or especially, Kitty, a lady representing the world’s oldest profession in her grand fashion to the delight of all. Perhaps her profession should not reflect her worth as a person. Perhaps we are too quick to judge others in our workplace and our shops because of a label associated with their name or profession.

All peered through the yellow-colored nightlights of a sleeping city, and then there he was, walking across a deserted parking lot, oblivious to the manhunt in progress. Unaware that a small boy was about to learn that a difference in social class existed. That there were people who had not, unlike me, been provided much and, alas, from whom little was to be expected.

Hunky Bill was the first to catch up to him. Hunky Bill was lean and muscular. He sported a pencil-thin mustache, the Boston Blackie kind, and wore a hairpiece betrayed by a thin wire highly visible to all but unaware, seemingly, to him.

In an instant, the homeless man found himself surrounded by pursuers eager to please and help. Women fingered their way through their purses as men took out their billfolds. Barkeeps had only change but each gave as liberally as their ability permitted for the necessity was great. Perhaps now, in the present marketplace, a somewhat greater effort with regard to benevolence to others of lesser means would go a long way on the road to redemption. Perhaps we should spend more time encouraging our colleagues who have not yet succeeded than celebrating those who have.

The cacophony rose to a misunderstanding of what was being said as all, except the homeless and hopeless man, vainly attempted to vociferously rise above their neighbors’ pleas for betterment of their past transgressions. The target of the manhunt somehow realized that he was in charge and had a magical spell cast upon those whom he hoped to become – if only he had been given the chance to do so.

The night ended for the hungry and homeless man as it had begun. All the rescuers retreated back to the dining room table to eat, drink, and reflect upon the good that had been done. All but my father. I knew where he’d be. In the back room. Getting a care package together for our visitor with no home.

The cardboard box was almost packed when I worked my way back to him. Italian bread from the baker two corners down. Specialty meats from the Jewish butcher and about a foot-long slice of kielbasa from the Polish merchant, all of which would be bartered for some attention and acceptance from his peers on the streets. On top of the box my father had placed a bottle of Four Roses, which was most coveted by all with no means. The food, I was told, was what I would have wanted if in the visitor’s position. But the knock at the door wasn’t for food. The knock was to check in. To make certain that he still mattered. A word of caring. A word of encouragement. He had wanted to know that he was still relevant. That he mattered. That he was a person of some worth.

Perhaps we all spend too much time congratulating those for their success and not enough time encouraging those still seeking.

I was told when giving over the box to first thank him for his visit. Shake his hand and then welcome him back again when he was in town. Having done so, the man without a home and nothing to his name thanked me and vanished into the night, his eyes watering with gratitude as the nightscape swallowed him up into the darkness.

But I’ve seen him dozens of times since that encounter so long ago. Sometimes wearing a suit. Sometimes wearing a dress. At expensive gatherings and in boardrooms. He is always about. Black or white, thick or thin, there he is. Always knocking at the back door for recognition.

The marketplace is a strange place with riches to be had and fortunes to be lost, with Hunky Bill, Pops Lockney, and Kitty metaphorically conducting their business as they attempt to make their mark upon us all. But should we forget, individually and collectively, that there shall always be those of us knocking at the back door, we are lost individually and collectively. Success, it seems, is a partnership between dancing couples to the tune of what might have been, what could have been, and what is. We all need to know the comfort of a door answered when one night we find ourselves at the back door of an establishment filled with fools thinking the government takes care of its own.

They are all gone now – my father, my mother, Hunky Bill, Pops Lockney, Kitty, the three couples for dinner, and the hopeless man without a home. All of them. Gone. But the lessons learned that night and so many nights that followed left me with a welcome and secure feeling in the marketplace in which I have practiced for the past five decades. Because all the highly educated among us, all those with au fait and bel-esprit, the dashing and the beautiful, the smart and the quick, young and old; those of us with a 16-page CV, BA, or a Ph.D.; all of us, it matters not, have one common denominator: On one very dark night we shall all come a’ knocking on the back door.

2 thoughts on “Homeless and Hungry. Lessons First Learned. And the Government Can’t Feed Me”