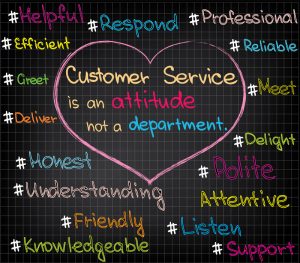 Is customer service dead? Not in Old Town, Florida! Population of about 6,000. Located about two hours south of the Georgia/Florida state line. As you approach the only intersection in this small town, turn right and proceed 11 miles for the best hamburger in town. Turn left and approximately two football fields down the road you will find a hardware store on the right.

On a sleepy Saturday morning, I entered the hardware store on a quest from my bride:  Return home with eight solar-powered nightlights needed for a riverfront home we just purchased. I was greeted by Ned, and I explained I needed eight replacement lights. Although he didn’t carry them, he said he could get them for me. After all, this was not a big box store, but he could get anything a big box store inventoried. I placed the order and proceeded back to my bride with the good news.

Three hours later my phone rang. It was Ned, who had cleaned one of the lights I had brought into him for replacement. He had put a new battery in the unit, and the nightlight now worked perfectly. And instead of spending $150 for the replacement lights, I now was looking at a cost of less than $12 for the replacement batteries for all eight lights.

I was gob-smacked, literally taken to having a seat and contemplating what had just happened. I hastened to my bride, also a hyper ethical professional with whom I often share applied ethics and the conundrums they present in the marketplace and in private life. I am a huge proponent of customer service; I pride my small shop with providing the finest customer service in the marketplace. The time and money I invest in customer service is unheralded among the overwhelming majority of my competitors.

But I was not at all certain, based upon the phone call from Ned, that I rose to his level of customer service. When was the last time I fixed something for a client rather than ordering something new that my client came to me for in the first place? When was the last time I even considered such a transaction? I was stunned and humbled. Applied ethics: You’ve just got to love it.

My bride and I are now the proud owners of eight working solar-powered nightlights at a cost of about $12. And I am also the proud owner of a new criteria regarding customer service, humbled by the lessons learned from Ned, who clearly knows the value of every customer he encounters in his small store in this small town.

As an aside to my lesson learned, my bride and I returned to the hardware store to offer Ned a $75 “tip,” my quick mathematical calculation of the profit he lost on the sale of eight new nightlights. He politely declined. We then promptly purchased a new wheelbarrow that we needed for $150, some hand tools for gardening (an additional $40), and a lock for a gate illuminated by a refurbished nightlight.

Have you ever had an experience as this? What did you learn from it? What were/are your thoughts?