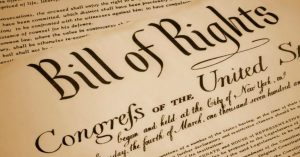 The Bill of Rights: Valuation vs Land Use

Few of us have read the U.S. Bill of Rights, which is quite understandable. However, the last 12 words of Article 5 have shaped our nation and introduced a niche legal area of the law known as condemnation or eminent domain.

“… Nor shall private property be taken for public use, without just compensation.” We have forgotten that our ancestors were routinely forced out of their homes and businesses by their landlord and our now good friend, England. Routinely. Imagine a knock on your business door.  There are armed soldiers telling you to gather your belongings and get out as they are going to take your property for their use and comfort. No compensation. No appeal. No warning. Get out. Now.

The taking of private property for public use is ubiquitous and well documented up to and including today. The government has the police power to take your home or your business.  It needs only to demonstrate in court that it has fulfilled three obligations.

Second, that the government has made a good faith effort to compensate you for your loss by employing credentialed and qualified professionals to value that which is being taken from you.

Finally, the third requirement is that you are offered just compensation for your property.

The sticking point is obviously the third imperative: just compensation. But that matter is decided in the after situation of your home being taken from you, at least on paper. You are out. The only question becomes, “Are you being compensated fully for your loss?” An entire industry has been built on this one question. A good percentage of legally brilliant minds may be found in the arena of eminent domain, the Gentleman’s Law, although many brilliant women are entrenched in this legal area of our laws as well. No chasing of ambulances here. No billboards imploring you to call a certain telephone number.

It would seem at first blush that just compensation would be a number both sides would quickly establish. However, there are many laws, based upon court decisions, that seemingly defy logic. One such case law is Rorabeck.

In this matter, a 25-acre plant nursery site was reasonably needed by a county school district for public school purposes. Inventoried upon the land was over $300,000 of plant material in various stages of development. That is a fact of consequence regarding the 160 hours thatch I and my staff put into the plant inventory itself.

The condemning authority, the school district, appraised the value of the land itself for its best and highest use, housing, not agriculture as it was currently zoned for the plant nursery.  Because of that fact, the school district reasoned, the plants added nothing to the amount that a willing purchaser, seeking the land for its highest and best use, would offer.

The district’s estimate of value for the property was made in good faith and based upon valid appraisals. The owner of the plant nursery was compensated for the property taken but the plants, in the eyes of the law, had no value.

Consider this assignment when an insurance claim comes across your desk. The best and highest use of the land might well factor in your decision-making process.

1 thought on “The Bill of Rights: Valuation vs Land Use”