One of the first lessons to be learned by a state official when inspecting trees to be earmarked for destruction during a viral outbreak is consideration of the homeowner.

Rule #1: Be polite to the lady who opens the door to her home.

This matter concerns both the before and after situation of a class-action lawsuit brought about by a prominent eminent domain attorney relating to the citrus canker outbreak.

The before situation found this prominent and well-known attorney at work when the knock came at his residence door. Two inspectors rudely informed the attorney’s kind wife that they were there to inspect her citrus trees. And if the citrus trees were suspect or in the footprint of established regulations for removal, they would be cut down with a chainsaw. Any interference and the police would arrive, and charges would be filed against her. On their way to inspect the citrus trees in the backyard, the wife observed one of the inspectors kicking at her small dog. She immediately and hysterically called her husband. 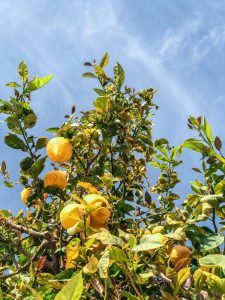 once stood. He also found his wife in tears and the dog cowering in the corner of their living room.

The enraged and aforementioned prominent attorney calls me. Do I know how to appraise a citrus tree? Well, since I have worked with him on at least six previous assignments involving tree appraisals, I responded with confidence that I could.

Next step: The Florida Supreme Court. Charges are brought against the Department for inverse condemnation, the taking of personal property without due process and just compensation. Months pass. The ruling comes from the Supreme Court: There was a taking.

Phone call from aforementioned attorney to me instructing me to proceed with my appraisal. Not a problem. Three or four mature citrus trees cut down ought not to present a problem in appraising their value. Wait! What? Tens of thousands of trees! No species name. No size. No condition ratings. No pictures. This was going to be a swell time.

And so it came to pass on that fateful day that I set to the task of creating a matrix that would pass by numerous attorneys and courts of law before it could be testified to or accepted as an approved document. Making my testifying life easier came the fact that the Department had marked the trees as “Good,” “Fair,” or “Poor” condition before placing the chain saw to their trunks. But still no species. Any good ole boy knows the difference in quality of a “Honey Bell” and a “Valencia” and the costs associated with either. So, there was that hurdle to get over.

And the Department had in its infinite wisdom labeled the trees by size such as “small,” “medium,” or “large.” Never mind that there are over 10 different sizes that citrus trees are marketed for sale, and none of them read like the Department’s label.

In the end I discovered, after three successful verdicts, that at least I knew how to create a matrix acceptable to a court of law.

And I had learned a far greater lesson: Never, ever speak impolitely to the lady of the house and wife of a prominent eminent domain attorney.

And never, ever kick at their dog.